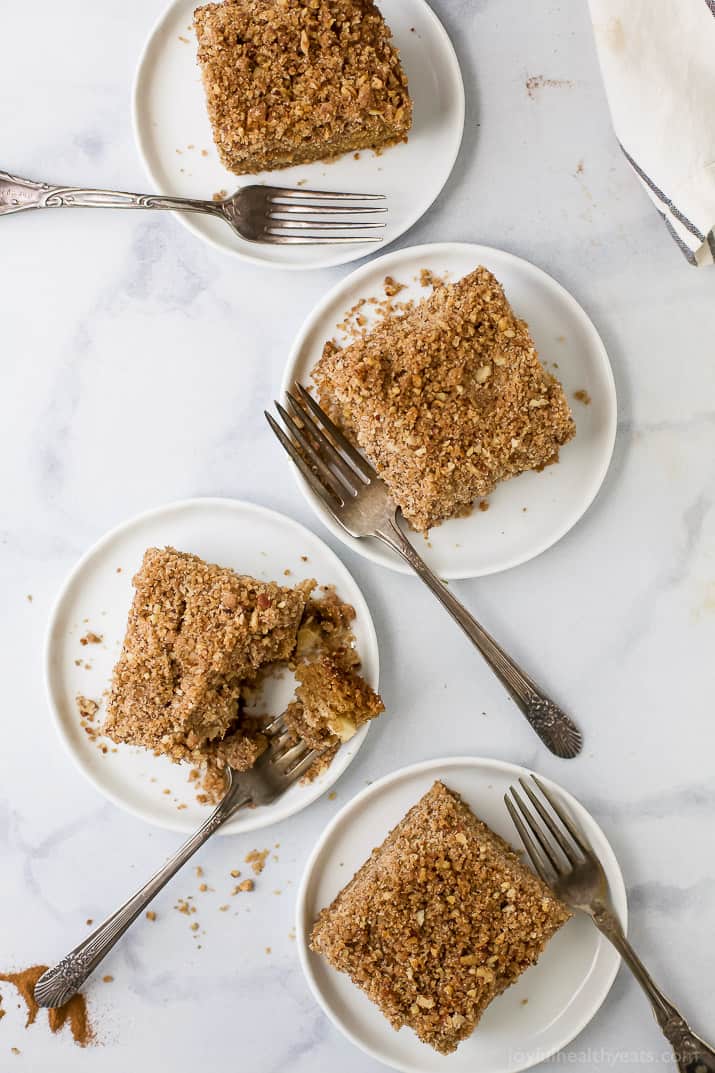 A moist Apple Cinnamon Coffee Cake that screams fall baking! Made with whole wheat flour, filled with bold cinnamon flavor, tender chunks of apple and a crumbly nut topping that you’ll want to fight over. Perfect for breakfast or dessert this holiday season!

Guys we leave for Disney in like 3 days! Eeek!!!

I seriously can’t remember the last time I was there, maybe when I was in high school or middle school? So, like 15 years ago. Oh my gosh, that’s depressing to think about it.

This time Disney will be way different. Last time I went with little kid excitement and with my parents. Now, I have a kid of my own. I can’t wait to see his reaction when we get there. The look on his face when we first walk into the parks. 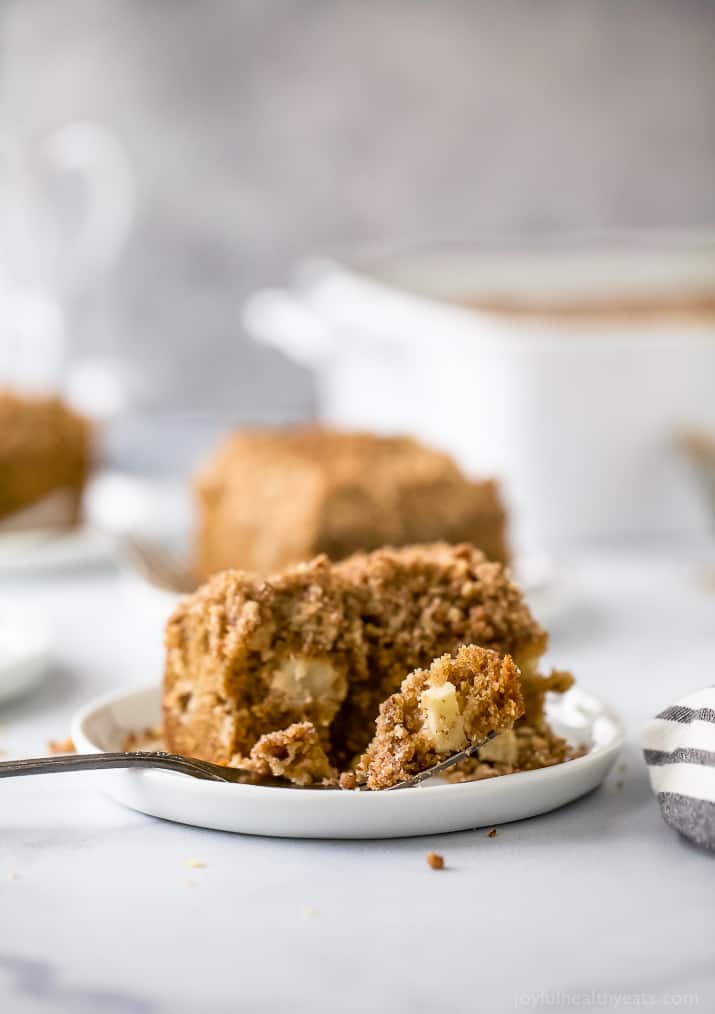 He honestly gets excited every time I talk about it, but I don’t think he knows what to expect. We’re actually going with friends of ours and their kids too (all five of them). I think Cason’s more excited about going with friends and having mommy and daddy to himself again. Which hasn’t happened a lot since Madison’s been born.

I know I’m gonna be whipped out but it’s worth it right.

To be in the happiest place on earth, eating all the things, riding all the rides and walking 20,000 steps a day. I’ve heard you just crash when you get back to the room.

Do you guys have recommendations or things we absolutely need to do? If you do, let me know STAT because we leave Sunday morning! Oh and be sure to follow in my Instagram Stories to follow the trip! 🙂 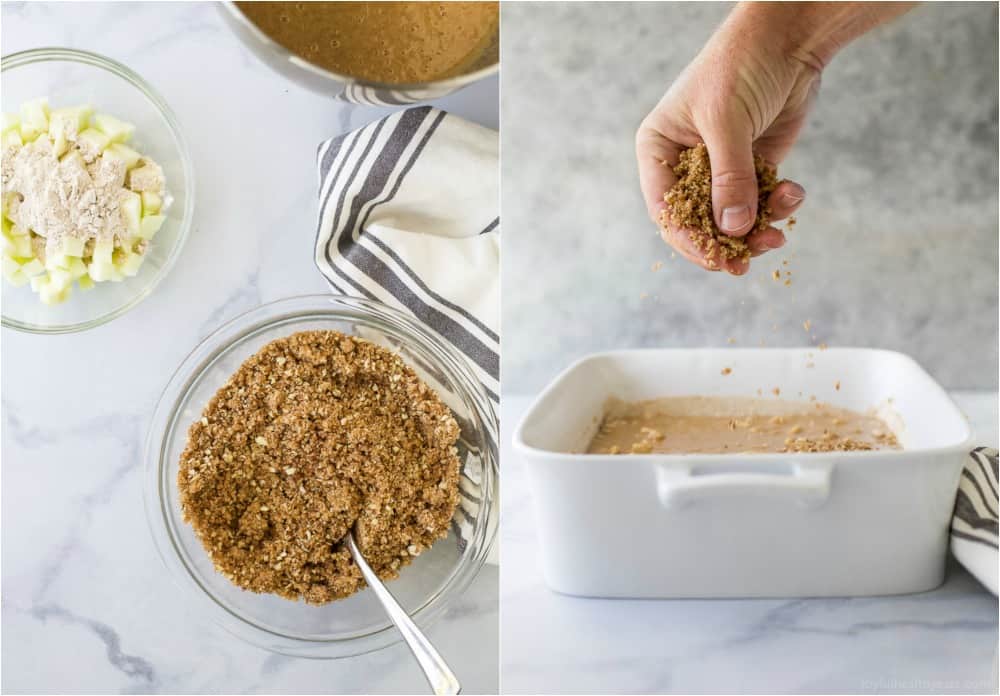 Until then lets dive into this Apple Cinnamon Coffee Cake Recipe. Mkay?

Y’all the Coffee Cake base for this recipe has been in my husbands family for years, so you know it has to be good. It’s still one of the “go to” breakfast recipes they make when we’re all together. Coffee Cake is a must, at all times when around my husbands crew. In fact, some of them actually request it for their birthday cake.

Upon “entry” into their family by marriage I was lucky enough to inherit this recipe, along with their wonderful family. 🙂 I’ve tweaked the recipe a little bit here and there.

I’ve made a Pumpkin Version, a Pumpkin Spice Latte version and now this Apple Cinnamon version.

Honestly, I can’t decide which version I like the most. My husband and his family would probably stick to the original but I’m all about adding variety. 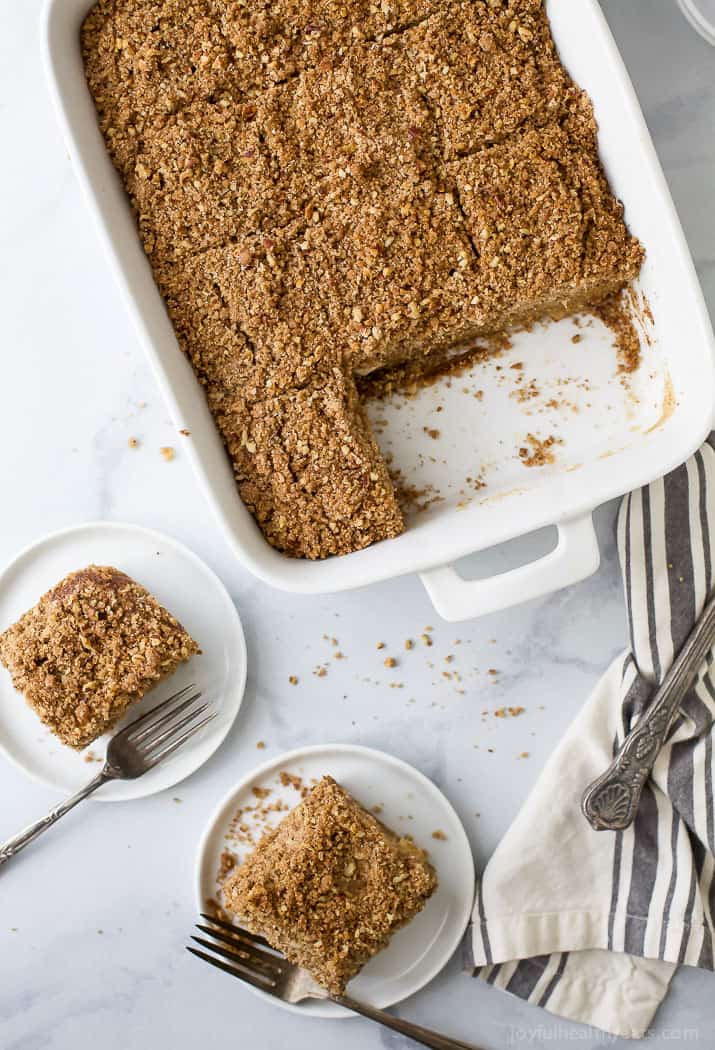 This Apple Cinnamon Coffee Cake has bold cinnamon flavor, tender chunks of apple and a crumbly nut topping that you’ll want to fight over. I say that from experience. The topping is everything!

Your fall baking game will be starting off strong with this Coffee Cake recipe in hand. It’s a must make. You’ll want it for breakfast, dessert, snack… anytime you can have it! You probably have all the ingredients in your pantry already. So what are you waiting for. Go make it! (just a heads up… this recipe is not healthy but it definitely is joyful … wink wink) haha

Bon Appetit friends and happy weekend! See you on the flip side! 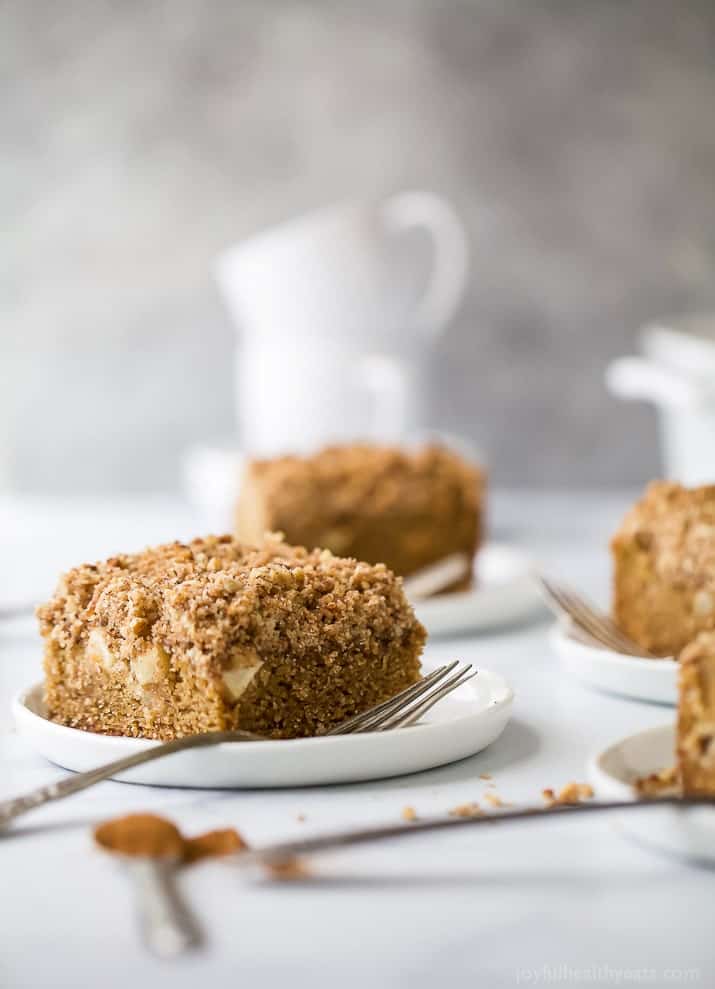 A moist Apple Cinnamon Coffee Cake that screams fall baking! Made with whole wheat flour, filled with bold cinnamon flavor, tender chunks of apple and a crumbly nut topping that you’ll want to fight over. Perfect for breakfast or dessert this holiday season! 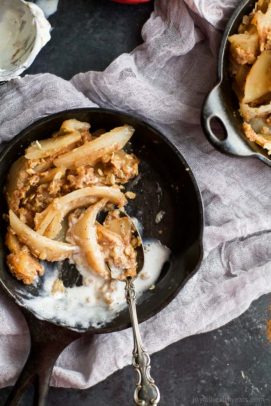 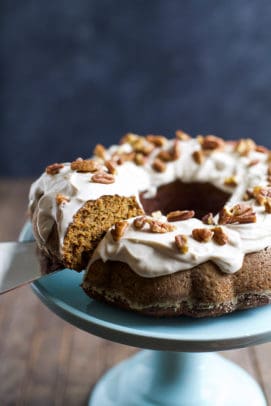 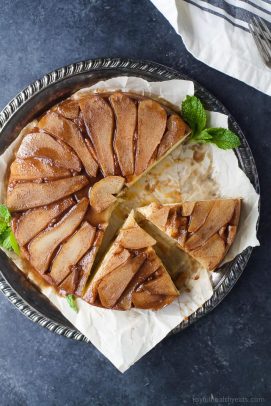 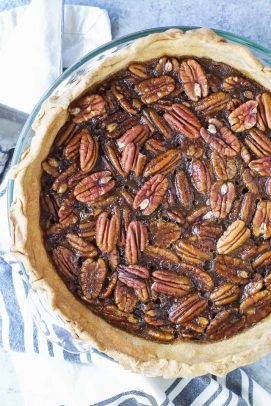 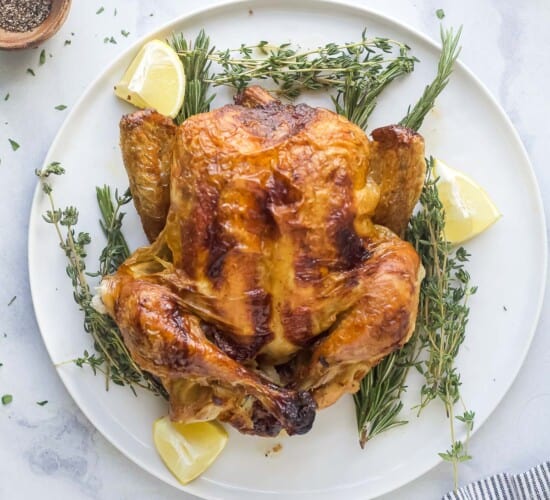 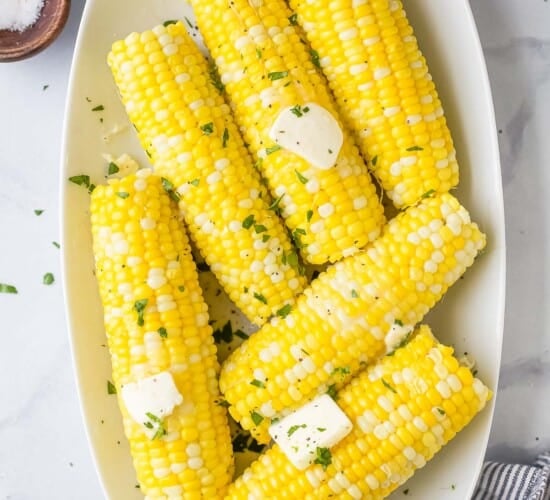 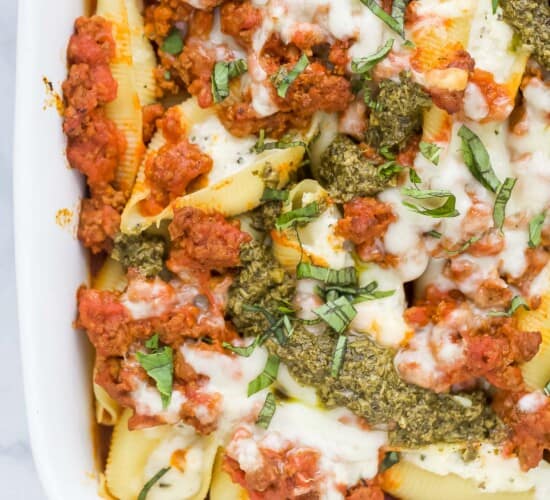 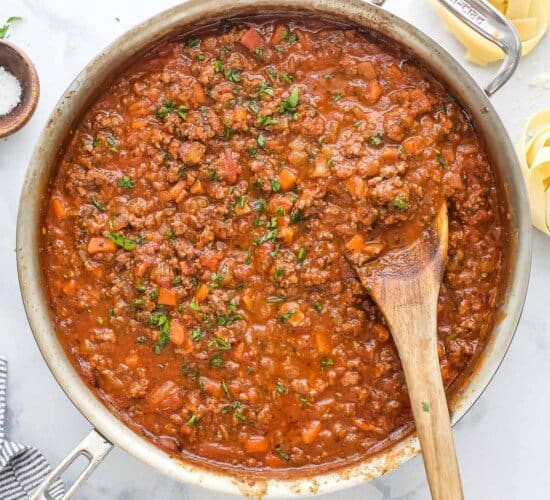 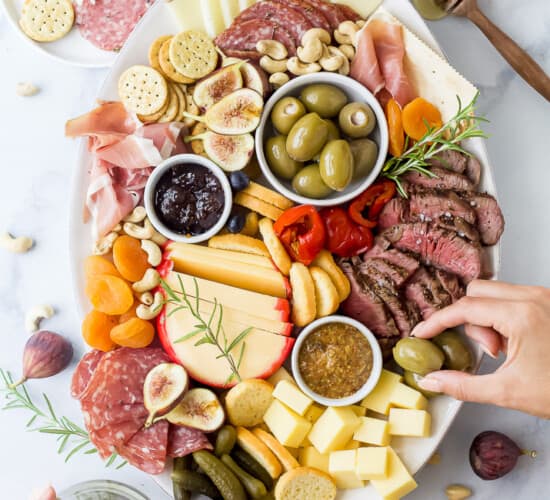